Key partners with the Ministry of Health in the fight against HIV / AIDS, Unitaid and the Global Fund organized a joint mission in Cameroon from 24 to 28 June 2018 with Solthis and Expertise France. The mission allowed to discuss with local stakeholders the challenges  of  implementing  the national HIV / AIDS program, including the decentralization of HIV viral load testing to assess the treatments effectiveness for people living with HIV.

This visit was organized as part of the OPP-ERA project, funded by Unitaid and implemented by Expertise France in Cameroon under the coordination of Solthis, to develop access to the viral load testing. The project supports the use of Open and Polyvalent Platforms (OPPs), an innovative molecular biology technology for measuring HIV viral load. Since the beginning of the project in 2014, more than 40,000 tests have been realized with the OPP system, of which nearly 10,000 have been completed during the first half of 2018.

The delegation visited Laquintinie Hospital laboratory in Douala, the largest hospital in the coastal region included in the OPP-ERA project since 2014. To date, nearly 25 000 CV tests were carried out. The delegation also payed visit to the “ Centre Pasteur ” in Yaoundé, a key partner of the OPP-ERA project, whose office in the north of the country (CPCAG in Garoua) has also been part of OPP-ERA since 2014. This site remains today the only laboratory to offer viral load testing in the 3 northern regions (Far North, North and Adamaoua) where access is particularly difficult. The Yaoundé Pasteur Center will also host the training of technicians who will be working  at two new laboratories that will soon open at  Yaoundé Central Hospital and at Bertoua Regional Hospital, located in the east of the country.

This mission was futhermore an opportunity for the delegation to participate with all stakeholders in the 3rd meeting of the new Lab Task Force: a working group dedicated to laboratory activities in the fight against HIV, tuberculosis and  hepatitis. This meeting, which took place at the LNSP (National Laboratory of Public Health), allowed to discuss with local partners, the optimization of the equipment already deployed in the country for viral load testing  to diagnose other pathologies. Indeed, it is essential to define national strategies allowing the use of the equipment already functioning in routine to make available other diagnostic tests such as for tuberculosis or hepatitis B and C.


The mission was closed on Thursday with a return to the Ministry of Health of the key elements discussed during this visit. In particular, this visit strengthened partner coordination for the implementation of the national plan to accelerate access to the HIV viral load test. The mission also discussed the support given to the two laboratories that will soon be offering the HIV viral load tests and to prepare for the transition of the OPP-ERA project scheduled next year. 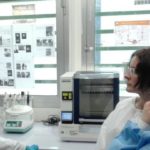 PACTES & OPP-ERA: a common synergy to place HIV infected patients at the heart of the healthcare system