Michele Boccoz visited the Abidjan Research and Training Center (CePReF) on Friday, January 20th. The visit  was organized by the French Ministry of Foreign Affairs and International Development. The Ambassador was accompanied by representatives of the PACCI program (research program supported by ANRS and Inserm in Ivory Coast), Expertise France, the Ivorian National Program for the Fight against AIDS and the NGO Solthis.

At present, 16,000 patients infected with HIV / AIDS, of which 1,287 children are monitored at CePreF, including 6,000 adults and 400 children who receive antiretroviral therapy. CePRef is one of the main healthcare centers in Abidjan, located in the most populated area : Yopougon.

The CePReF laboratory is one of the two main laboratories where OPP-ERA, the project for access to viral load testing, is being implemented. Funded by UNITAID, the project has just been extended for 3 years. The Ambassador also visited CeDRes, the second laboratory on Tuesday 17 January.

CePReF   has been equipped with open platforms as part of the OPP-ERA project. This “open” and innovative system, used for medical molecular biology techniques, makes it possible to carry out HIV viral load tests.

At the end of her visit, the Ambassador expressed her satisfaction and encouragement to the the CePREF laboratory team. Michèle Boccoz emphasized that the OPP-ERA project, beyond its technical quality, is a tool adapted to public health concerns in Ivory Coast in the fight against infectious diseases.

Funded by UNITAID and implemented by  a Expertise France in partnership with the Ivorian National Program for the Fight against AIDS (PNLS),  OPP-ERA has already enabled more than 24,000 viral load tests in Ivory Coast since its launch in 2013.

The local press talks about the  visit

The OPP-ERA project is part of the international community commitment to diagnose and treat people living with HIV. By 2014, UNAIDS has set the goal of “90x90X90” so that by 2020, 90% of all people living with HIV can know their HIV status, 90% of people diagnosed  HIV positive receive sustained antiretroviral therapy, and 90% of people under treatment have a viral load to test. 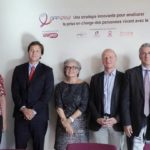 Towards access to HIV viral load testing for all in Cameroon: the OPP-ERA project launches its second phase phase of activities